Oh goodness- There goes Quinn again, being all 18 month-ish. We were at a friends house and they had a t-ball set with a baseball bat… I am sure you all know where this is headed! It is like a mommy sense that we all gain after caring for a child. It’s almost as if you can read their mind when they are about to do something they shouldn’t be doing. Ooooor it was the fact that she was winding up the bat and heading towards one of her friends.. I mean, it is one of those two things :). 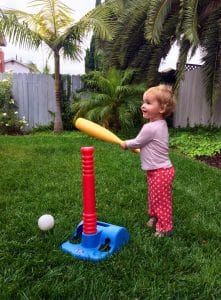 Instead of immediately saying “NO!” or putting her directly in time out, I taught her the appropriate use of the bat! One of her older friends was using the t-ball set so we let Quinn watch the older friend hit the ball; this is called ‘peer modeling‘.

After my little one had a better idea of what the bat was REALLY for, my husband physically prompted her and he taught her how to hit the ball off the tee and gave her verbal praise after she was using it appropriately (Boom! Positive reinforcement). Shortly after, she was hitting the ball off the tee independently. After this brief teaching, the attempted assault on her friends reduced immediately and everyone could enjoy their evening without the fear of a bat coming at their face, lol.

Now, in this situation, Quinn did not necessarily have a behavioral problem but more of a skill deficit. She did not know how to play with the bat in the appropriate way! If I would have IMMEDIATELY taken the bat away or put her straight to time out because I thought she was being malicious with the bat or wanting to be “mean” towards her friends, she would not have learned a new skill that day… And a skill she was actually pretty good at! Who knows… Maybe this experience has sparked a life long love for the sport of softball?!? Come on Olympic Games 2032!